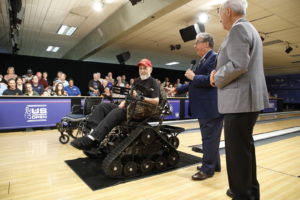 The win marked the sixth time in her career that Liz has claimed the coveted green jacket, inching closer to the heights of women’s professional bowling icon Marion Ladewig. Plano Super Bowl owner Jamie Brooks was delighted to have his center be part of bowling history.

But before those finals ever got started on Sunday, the crowd assembled at Plano Super Bowl lauded a hero of a different kind – Vietnam War Veteran and Texas native Mike Smith.

Smith, who comes from a family of veterans, joined the Marines in 1964, one year after his older brother Billy returned home a quadriplegic after being shot in the head while serving as an Army medic in Vietnam.

Mike went to boot camp in 1965 and was deployed in 1976, serving with the Third Reconnaissance Division as a forearm observer for artillery and close air support. It was during this time that he was exposed to Agent Orange.

On Sunday, Mike was introduced to the Women’s Open audience by Jamie Brooks, as part of his effort to raise money to provide mobility-restricted military veterans with automated all-terrain wheelchairs. The wheelchairs will allow veterans access to beaches, hills and otherwise difficult-to-navigate topography.

In the past five years Mike has been diagnosed with several of the signs of Agent Orange including diabetes and congestive heart failure. He also had to have both knees replaced, due to damage suffered while in Vietnam. He has endured multiple surgeries and has been confined to a wheelchair.

Explains Brooks, “When I learned about this opportunity to give veterans like Mike a chance to get out and really enjoy life through the use of these chairs, I knew it was a great fit for our area bowlers and the BVL effort. Mike’s greatest joy would be to expand his world by allowing him to go hiking, fishing and camping with his four grandchildren. Mike would be able to go to the beach and not have to stay up on the sidewalk. With the help of America’s bowlers through BVL, we can give Mike and other veterans the gift of their outdoor life back.” 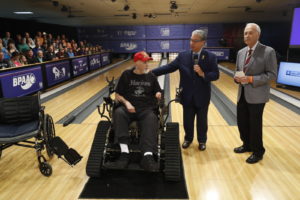 Mike took ownership of his new “Track Chair” wheelchair at the event on Sunday, as his son-in-law Eric Foote rolled him onto the lanes. BVL Board Chairman John LaSpina joined Jamie to introduce Mike to the crowd. “This is the perfect example of the great things BVL does for our veteran community,” said John. “We see the possibility of brightening a veterans’ life and we make it happen. We make very real, concrete differences.” John continued, “But let me be quite clear, programs like the gift of this track chair don’t just appear out of thin air; they’re created thanks to people like Jamie Brooks. Jamie saw a need and ran with it – that’s BVL leadership at its finest. Mike, we’re honored to be able to present you with this chair and, Jamie; we thank you for making it happen!”

BVL supporters are encouraged to help the cause through a special donation, either via the website (note “Wheelchairs” in the “Designation” window), or by mailing a check to BVL Headquarters at 11350 Random Hills Road, Suite 800, Fairfax, VA 22030. Be sure to earmark the check for “Wheelchairs”.