Since 1942, the Bowlers to Veterans Link (BVL) has held a premiere position in support of recreation therapy for our nation’s veterans.  With humble beginnings in World War II, and a long and storied history since, BVL has maintained its leadership role in providing recreational programs and services for those who have served our country.

Recreation therapy, designed to maintain or improve physical, mental, and emotional well-being as well as reduce depression, stress, and anxiety, has been the hallmark of BVL’s programming; helping veterans maintain or recover basic motor functioning and reasoning abilities, and build confidence and socialization skills. To that end, BVL dollars have funded the purchase and use of sports equipment, arts and crafts supplies, pet therapy activities, games, dance, drama, music and community outings at VA Medical Centers, Vet Centers and State Homes around the nation.

For the founders of BVL, recognizing the importance of recreation therapy was natural.  As league bowlers supporting the war effort in WWII, they knew the value of an afternoon out bowling with friends.  They lived the example of the benefits of an activity that also provided an opportunity to build amity and camaraderie – fun, fitness, and friendship are built in to the sport. 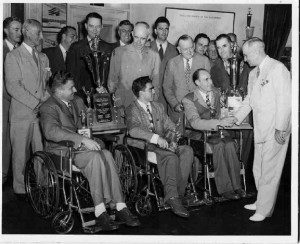 At the conclusion of the war, BVL began working alongside the forefathers of today’s recreation specialists.  In an interview with an acknowledged pioneer in the field for the Department of Veterans Affairs, Dr. Bernath Eugene Phillips, writer Jeff Mansfield quoted Phillips recalling work for the VA in 1945, “The BVL was one of the first (organizations) that I got associated with when I went to Washington…we used the BVL and started a bowling tournament among all VA hospitals. The first BVL tournament was held in 1947 and seven of the 31 VA hospitals were entered. (Former BVL Executive Director) A. L. Ebersole deserves the credit (for bringing this recreation therapy to the veterans).”

James E. Pixlee, the Director of Athletic Service of the Veterans Administration in 1947 wrote this about BVL, “It is impossible to overstate the value of the aid afforded by the BVL.”

Today, BVL remains at the forefront of recreation therapy for veterans.  The same tournament launched by Ebersole is still conducted by BVL each spring.  Every year, hundreds of veterans from VA Hospitals as well as from Vet Centers around the nation compete in a variety of divisions, including wheelchair, visually impaired and seniors.

Also, as it has for decades, BVL provides grants to individual VA hospitals for the purchase of the range of necessary materials – from sports equipment to art supplies, from books to musical instruments.  “We know we can count on BVL to get us the tools of our trade,” says William Ball, Chief, Voluntary Service for the VA Palo Alto Health Care System which has three inpatient divisions in Palo Alto, Menlo Park and Livermore, California. “If we want to get a music therapy group together and need guitars, I go to the BVL.  If we want to take a group of the veterans to a ball game, and get them out of the hospital and have some fun, we call on BVL.  They have always been there for us.”

While BVL remains dedicated to its long-time programs like the tournament and the facility grants, the organization is also committed to staying current.  For instance, BVL added new electronic bowling divisions to the annual tournament to acknowledge the increased use of active video games in the recreational therapy process. 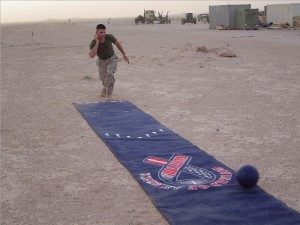 Similarly, BVL brings bowling fun to active duty troops overseas, thanks to the “Lanes for the Troops” program.   This effort features a 26 foot long red, white and blue carpet bowling lane, a 5 lb. rubberized bowling ball and lightweight plastic bowling pins. The lane, ball and pins, packaged in a nylon carrying bag, can be set up in a few minutes time, whenever a break in the schedule permits. The kit also includes score sheets and instructions.  More than 550 kits, sent to troops from Kuwait to Afghanistan, have been met with great enthusiasm.* From the U.S.S. Enterprise, one seaman writes, “Whenever we find a time to set the lane up, it tends to bring out Sailors from every hatch looking for a chance to relieve some stress. And everyone agrees that this is one of the coolest packages ever…”

Although the roots of BVL are in bowling, BVL funding supports a wide range of other sports and exercise activities.  When the Hunter Holmes McGuire VAMC in Richmond, Va. constructed a new gym for their Polytrauma unit, BVL stepped in to purchase cardio machines, free weights and a number of other pieces of equipment.  “Providing opportunities for veterans to engage in physical activities makes a big difference in their physical and emotional progress,” explains Recreation Therapist Shari Hicks.  “BVL understands that this is a critical piece of the puzzle.  Not only did they help us with our new gym, but they’ve supported probably hundreds of other projects here, too, and made a difference in thousands of lives.” 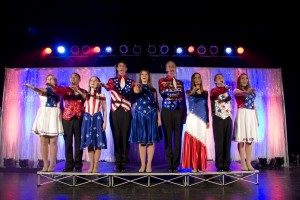 Music is another popular therapy in which BVL is very involved.  For almost 30 years, BVL has sponsored the tours of the energetic and effervescent entertainment troupe “Re-Creation.”  Each year, a new edition of these young singers travels across the nation, performing for veterans in VA Medical Centers and State Homes, bringing their special version of musical therapy.    Here’s what the staff at the Togus, Maine VA Medical Center wrote, “Re-Creation visited us . . . bringing the veterans a wonderful stage performance. Our veterans laughed, cried, and sang right along with the music. It was immediately evident how much the performance touched them.”  And from the Recreation Therapy department at the VAMC in Tomah, Wis., “The members of Re-Creation were great.  Such talent and enthusiasm! I enjoyed watching the show, but I also enjoyed watching the veterans — their toes were tapping, smiles spread across their faces, and several were practically dancing right out of their wheelchairs! To say the performance is “therapeutic” is just a slight understatement!

In addition to BVL’s own therapy programs, it has been a longtime supporter of the annual national veteran’s competitions and clinics hosted by the Department of Veterans Affairs – The National Veterans Wheelchair Games, Golden Age Games, Creative Arts Festival, Training Exposure Experience Tournament and the Summer and Winter Sports Clinics.  BVL has also supported a wide variety of other recreational therapy efforts including the USO and the Hospitalized Veterans Writing Project.

Today, BVL is headquartered in Metropolitan Washington, D.C. and is guided by representatives of the United States Bowling Congress and the Bowling Proprietors’ Association of America.