Thanks to America’s bowling community, when active duty troops around the world have some down time, they can enjoy some fun and competition. They do this with lightweight, portable carpet bowling lane kits, shipped complete with a rubberized bowling ball, ten pins and score sheets. 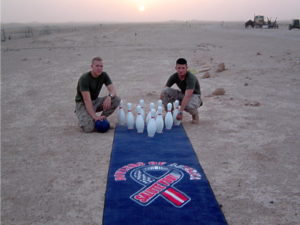 “Bowling Salutes America’s Troops,” introduced in 2005 by BVL, has now delivered more than 550 kits to troops. These troops are on active duty in Iraq, Afghanistan, Kuwait, Korea and a host of other countries. The program has been tremendously successful. It has provided soldiers, sailors and airmen an opportunity to take a break from the stresses of their jobs. The kit consists of a 26 foot long red, white and blue carpet bowling lane, a 5 lb. rubberized bowling ball and lightweight plastic bowling pins. The lane, ball and pins, packaged in a nylon carrying bag, can be set up in a few minutes time. The kit also includes score sheets and instructions.

“The response to this campaign has been tremendous – from both our volunteers and the service men and women who have received the kit,” explains BVL Board Chair John LaSpina. “We have bowling centers and league bowling associations signing up daily to support this effort, and the feedback from the troops has been absolutely wonderful. They love it, and we love it.”

Initial shipments of the lane kits went to 40 bases in Iran and Afghanistan. As word of the kits spread, requests for more lanes poured in. These came from individual service men and women in outposts around the globe. Reports from the troops indicate that the lanes are in use on rooftops in Baghdad. Additionally, they are being used along military airstrips, on board ships in the Gulf, and camps in the Iraqi desert. 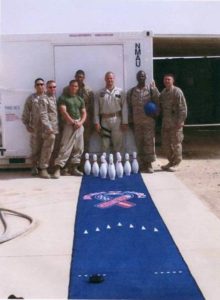 From the U.S.S. Enterprise, one seaman says this, “Whenever we find a time to set the lane up, it tends to bring out Sailors from every hatch looking for a chance to relieve some stress. And everyone agrees that this is one of the coolest packages ever…”

From Camp Arifjan, a soldier wrote, “I have to say that this is one of the greatest ideas I have seen come to Kuwait. Thank you for what you are doing for the troops.”

Campaigns to fund the contribution of a kit to the troops are underway at bowling centers from coast to coast. In Daytona Beach, (Fla.) bowlers have already raised enough money to send the lane kit. It was sent to 12 different former league bowlers currently serving in Iraq. In California, the bowlers at Tustin Lanes (Tustin, Calif.) have purchased 10 lane kits to support the troops. 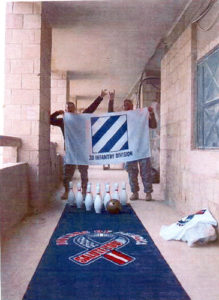 The program’s success has extended beyond the sport of bowling. In fact, campaigns to purchase and ship lane kits have been coordinated by a range of other organizations and businesses. A Sunday school class in Tennessee raised money to help the effort. In Rockford, Ill., Riverside Community Bank set up a lane in their lobby and encouraged customers to donate. “It was a fun way for Riverside to show our community service,” reports spokesperson Paula Schweinler. In Kentucky, USBC member “Jo” Wisby explains that after operating the campaign at a local bowling center, she took the idea to Wal-Mart, where the manager eagerly agreed to conduct their own campaign. As a result, they raised enough money to send over two lanes to the husband of a Wal-Mart employee now on active duty.