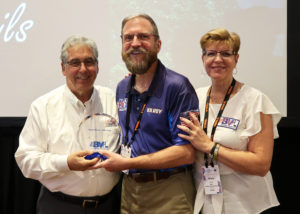 FAIRFAX, Va. (October 15, 2019) – David “Kilroy” Kellerman of Georgetown, Texas, has been named by BVL (Bowlers To Veterans Link) as the first recipient of the Helen Duval Award.

The Helen Duval Award, named after the bowling pioneer and longtime BVL advocate, was created this year by the BVL Board of Directors to recognize individuals who provide outstanding and dedicated service to BVL.

Kellerman, who co-owns Mel’s Lone Star Lanes in Georgetown, Texas, with his sister Dot Ammons, last month completed a 2,192-mile, five-month hike through the Appalachian Trail to raise funds and awareness for BVL and veterans.

BVL Board Chair John LaSpina and BVL Executive Director Mary Harrar made the presentation to Kellerman during the Southwest Bowling Proprietors’ Trade Show in Irving, Texas, last week. Kellerman also shared details on his 161-day hike through the Appalachian Trail with conference attendees during a “Kocktails with Kilroy” event. Additional donations this week have pushed his donation total to more than $80,000, eclipsing his original goal of $50,000. Kellerman, who began his journey on April 2 and finished on September 9, said that veterans and active-duty military were always top of mind during his more than 5.3-million-step hike across 14 states. “I just did the walking, putting on my boots every morning to hike. It’s nothing like what our military does every day to protect our freedoms,” he said. Kellerman battled through a bacterial leg infection, a dislocated hip and a hyperextended left knee to complete the world’s longest hiking-only footpath. The 57-year-old also challenged others in the bowling community to take BVL support “to the next level” with their fundraising efforts.

“David is as selfless as they come, always putting the spotlight on our veterans and the important work that BVL does every day to brighten the lives of veterans and active duty service members,” said LaSpina. “David exemplifies the indefatigable spirit and dedication that Helen Duval brought to everything she did for BVL and the bowling industry.

“The response to David’s Appalachian Trail hike has been tremendous, as so many people have been inspired by the meaning behind his journey,” LaSpina added. “His focus has always been about putting veterans first, and the best way to honor those efforts is by helping us double the original goal and reach $100,000 by the end of the year.” To donate online, visit Kilroy’s Hike page at BVL.org or Kilroy’s Appalachian Trail Hike for Veterans Facebook page.

A member of both the USBC and PWBA Hall of Fame and a bowling proprietor, Duval was a true pioneer in bowling and a tireless champion for BVL until she passed away at the age of 94 in July 2010. On the lanes, she won two pro titles during her career and captured Women’s International Bowling Congress (now USBC) Championships team event and all-event titles. Off the lanes, Duval was one of bowling’s greatest ambassadors, traveling the country to teach clinics, youth programs, and special needs bowlers. For more than two decades, she was dedicated to BVL and veterans, visiting veterans’ hospitals throughout the U.S. She was named as honorary co-chair of BVL in 1985, and in 2000 she received the Secretary’s Award, the highest award given by the Department of Veterans Affairs, for her unwavering commitment to America’s veterans.

Since 1942, BVL has provided more than $52 million in grants to VA hospitals and clinics to fund recreation therapy and programs for America’s veterans and active duty service members. BVL is bowling’s oldest and own charity, a national nonprofit 501 (c) (3) charity that is consistently acknowledged for efficient and effective programming delivered with extremely low overhead. BVL has been recognized as one of “America’s Best Charities” by Independent Charities of America, earned a “Top-Rated” Nonprofit distinction from GreatNonprofits, and is also a member of the Combined Federal Campaign (#93325).

BVL fundraising efforts and donations are generated year-round by the bowling community through a wide range of events, many specifically targeted around Veterans Day and BVL Month in America in November. Throughout November, BVL partners with hundreds of bowling centers to honor veterans and provide a way for communities to recognize their local veterans. BVL provides a BVL Month in America kit to participating centers. To donate online and learn more about BVL’s commitment to veterans, visit BVL.org.