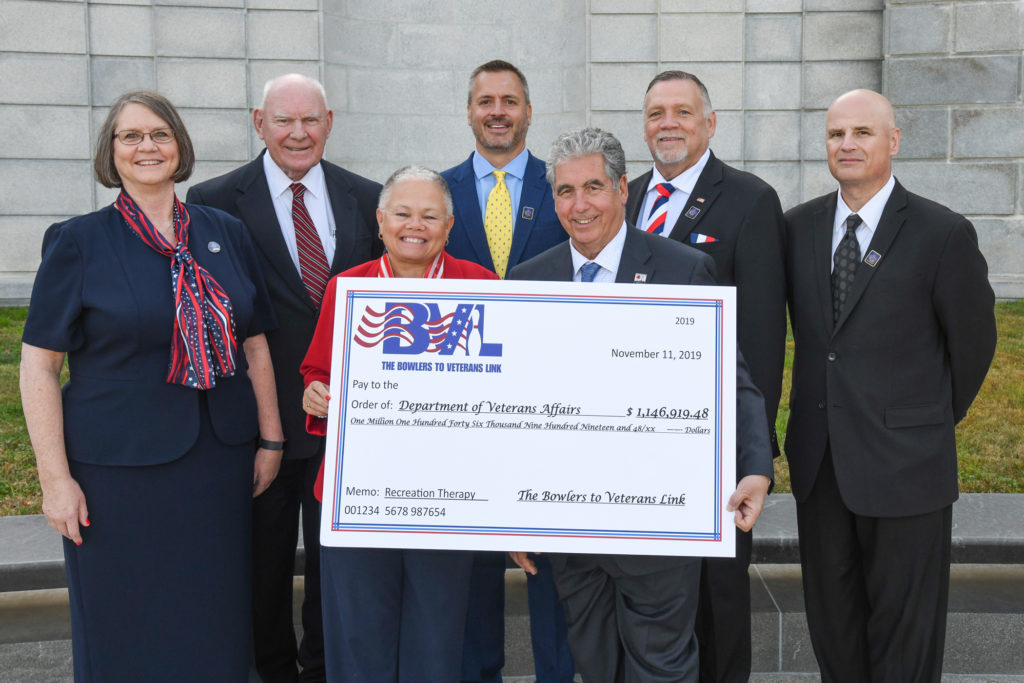 The BVL Board of Directors presented a check to the Department of Veterans Affairs on Veterans Day in Washington, D.C., for more than $1.1 million. The check, which will be used to support recreation and therapy services for veterans and active duty military, reflects donations raised during BVL’s fiscal 2018-19 fiscal year. Making the presentation are BVL Board members (from l. to r.) Karen Jost of Turnwater, Wash.; Wally Hall of Pasadena, Md.; Libbi Fletcher of Warren, Mich.; Tim Minard of Dacula, Ga.; John LaSpina of Long Beach, N.Y. (Board Chair); Dennis Hacker of Perryville, Mo.; and Keith Hamilton of Park Ridge, Ill.
Photo credit: Donna T. Johnson

FAIRFAX, Va. (November 18, 2019) – The focus of the bowling community turns to veterans this month with BVL Month in America, an initiative that brings awareness to the work that BVL (Bowlers to Veterans Link) does to support veterans and active duty military by funding recreation and therapy services throughout the United States.

As bowling’s oldest and own charity, the bowling community is active in raising funds and awareness to support America’s veterans since 1942. While many centers and bowling associations started their fundraising events around Veterans Day, BVL Executive Director Mary Harrar emphasizes that November is only the beginning of the ongoing year-round fundraising efforts including programs such as “Shoes For Freedom” which asks bowling centers to set aside at least one shoe rental daily for a month, quarter or year as a donation to BVL.
Over the next year, Harrar said the focus will be on the organization’s “I AM BVL” campaign, calling it a simple message to share with others about why they support BVL and its work with veterans. “Almost everyone has a personal connection to military service or a veteran, whether it’s a family member or friend, and I AM BVL helps tell the stories of the impact that veterans make on all of us.”
Harrar joined the BVL Board of Directors in Washington, D.C., for several activities on Veterans Day, including a BVL fundraising event, the annual BVL Board of Directors meeting chaired by John LaSpina of Long Beach, N.Y., and participation in a wreath-laying ceremony. The BVL flag was also included in the parade of colors which kicked off the national day of observance.
“It’s a tremendously emotional, almost indescribable, experience to present the wreath to the honor guard at the Tomb of the Unknown Soldier on behalf of BVL,” said LaSpina, who was one of four BVL representatives to participate in a wreath-laying ceremony at Arlington National Cemetery on Veterans Day. “It puts into perspective the undeniable sacrifices that our veterans make for all of us, and amplifies the importance of the work BVL does to provide needed support and services for all who have served.”
LaSpina noted that the bowling community has been a stalwart supporter of BVL and veterans over the past 77 years since BVL was founded, adding “there is still so much more we can all do to raise our voices and much-needed funds to brighten veterans’ lives.”
BVL Board member and USBC Vice President Karen Jost of Turnwater, Wash., and bowling proprietor David Kellerman of Georgetown, Texas, also represented BVL at the Veterans Day Breakfast with U.S. Secretary of Veterans Affairs Robert Wilkie. Kellerman, who recently completed a 2,192-mile, five-month hike through the Appalachian Trail to raise more than $80,000 for BVL and veterans, was also part of the BVL contingent participating in the wreath-laying ceremony.
The weekend in the nation’s capital kicked off with a fundraiser hosted by Bill and Kate Moore on the lanes in their home in Clifton, Va. Brunswick Pro Staff members Johnny Petraglia, Walter Ray Williams Jr., and Parker Bohn III also appeared at the event which raised more than $10,000 for BVL.
Free BVL Month in America fundraising kits are available to bowling center owners by contacting Mary@BVL.org or calling (703) 934-6039 or click HERE to download the kit. The BVL Month in America kit includes suggestions for open play and league programs along with a group event that can be implemented by centers during November or anytime during the year. The kit includes professionally-produced, customizable league and open play flyers to generate additional traffic throughout the center.
BVL also offers free soldier pin cutouts for centers to display throughout their venue when patrons make a donation. BVL wristbands and dog tags are available for purchase to use as incentives for special events and donations.
Bowling centers across the country will be hosting fundraising events during November and beyond, including two of BVL’s longest-running supporters. Don Carter Lanes in Rockford, Ill., owned by longtime BVL supporter John Sommer, is one of many centers connecting with their bowlers this month to help BVL fund programs in their local market. The center held a Bowling For The Troops fundraiser over Veterans Day weekend.HeadPinz & Bowland Entertainment Centers in southwest Florida recently got their fundraising efforts off to an impressive start, first awarding a $31,000 transportation cart last month to the VA Clinic in Cape Coral, Fla. The cart, which was funded from special events held last year, will help with the transportation needs of wheelchair-bound veterans. Throughout November, HeadPinz & Bowland centers will also ask their guests to donate to BVL and host special BVL tournaments.
Last year, BVL raised more than $1.1 million for the third consecutive fiscal year. Since 1942, BVL has provided more than $52 million in grants to VA hospitals and clinics to fund recreation therapy and programs for America’s veterans and active duty service members. BVL is bowling’s oldest and own charity, a national nonprofit 501 (c) (3) charity that is consistently acknowledged for efficient and effective programming delivered with extremely low overhead. BVL has been recognized as one of “America’s Best Charities” by Independent Charities of America, earned a “Top-Rated” Nonprofit distinction from GreatNonprofits, and is also a member of the Combined Federal Campaign (#93325). For more on BVL, visit www.BVL.org. 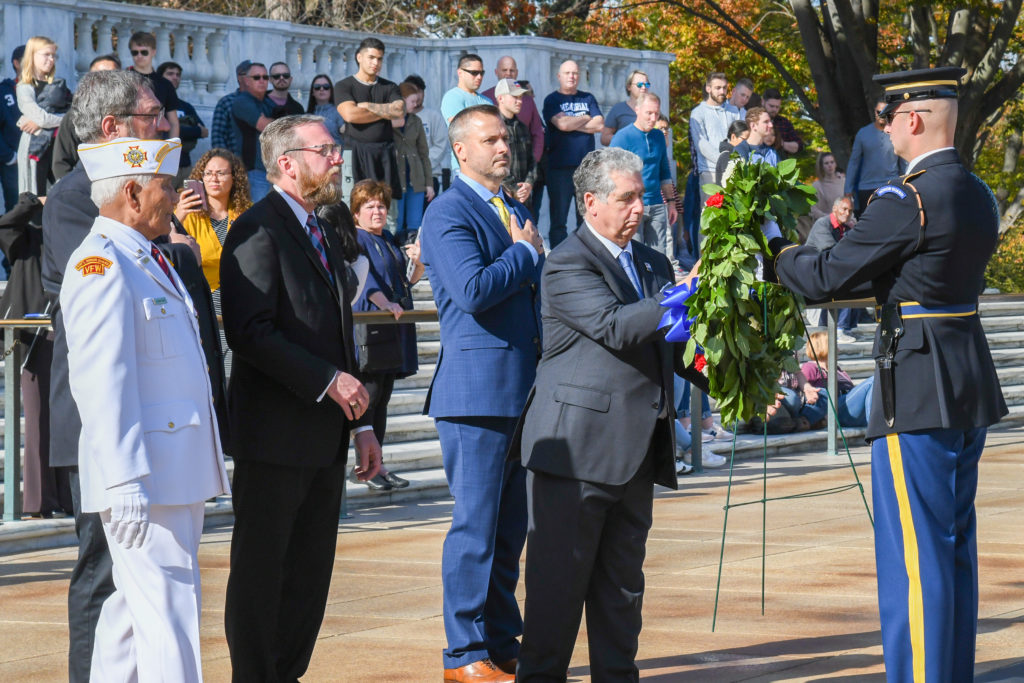 BVL Board Chair John LaSpina of Long Beach, N.Y., presents the BVL wreath to the Honor Guard at the Tomb of the Unknown Soldier at Arlington National Cemetery on Veterans Day. He is joined by BVL Board member Tim Minard (blue suit, right) and BVL supporters David Kellerman of Georgetown, Texas; and Bill Moore of Clifton, Va.