Representatives from the Bowlers to Veterans Link fanned out across the Washington, DC area this Veterans Day to participate in a variety of events to celebrate and honor our nation’s military veterans – from a breakfast at the White House, to a wreath laying at the Tomb of the Unknowns, to a meeting with VA Secretary McDonald – the day was filled with programs and activities designed to raise the public consciousness of the service and sacrifice of America’s veterans.

November 11 began early for United States Bowling Congress Executive Director Chad Murphy and Chairman of the Board of QubicaAMF Pat Ciniello. “We were proud to represent BVL and our great sport as guests at the White House breakfast honoring our nation’s veterans,” noted Ciniello.

Murphy commented, “I’m humbled, honored, and blessed to be part of these activities. Thanks BVL, thank you bowling. Thank you to all of our veterans on this day.”

BVL Board President John LaSpina remarked, “Although every day is Veterans Day for us at BVL, this was a wonderful occasion to join together collectively as a nation to reflect and remember what our veterans have done for us. President Obama’s remarks resonated with our BVL group when he stated in his speech, ‘We can acknowledge that we can never truly repay our veterans for what they have done for us, but we can try… We must honor their good work with our own.’”

BVL is a member of the National Veterans Day Organizing Committee and, as such, earns the privilege and the opportunity to lay a wreath at the Tomb of the Unknowns. Murphy, along with BVL Board Members LaSpina (BOD President), Libbi Fletcher and Karl Kielich accompanied the wreath to the Tomb.

The day concluded with a reception at the Women In Military Service for America Memorial where BVL representatives met with VA Secretary McDonald. There, the Secretary was presented with a facsimile check of more than $925,000, representing the amount of money the sport of bowling raised during the 2015-16 season to support recreational and therapeutic programs and services designed to boost the spirits of hospitalized veterans and help speed their recuperation.

“The Secretary’s interest in meeting with our BVL constituency clearly confirms his appreciation for our efforts. He never hesitates to illustrate his gratitude for our commitment to America’s veterans,” says LaSpina. “I explained to him that we are in this to win it; we have just begun to make our 16-17 year the best yet.” 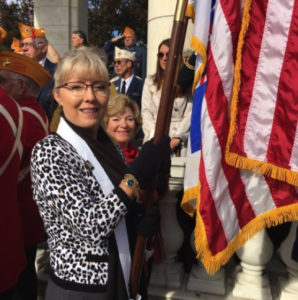 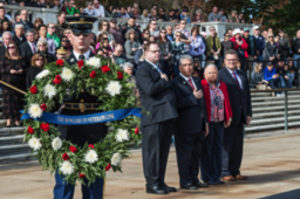 Karl Kielich, John LaSpina, Libbi Fletcher and Chad Murphy presented the BVL wreath at the Tomb of the Unknowns 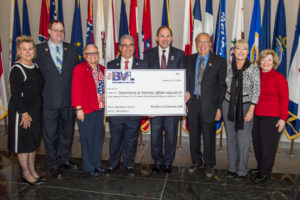 BVL Board Members and Representatives Present VA Secretary McDonald with Facsimile Check for $925,356.76 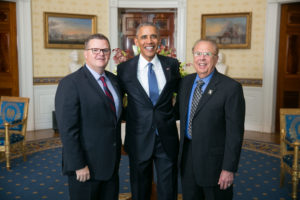 President Barack Obama greets Chadwick Murphy and Patrick Ciniello during a Veterans Day breakfast receiving line in the Blue Room of the White House, Nov. 11, 2016. (Official White House Photo by Lawrence Jackson)
This photograph is provided by THE WHITE HOUSE as a courtesy and may be printed by the subject(s) in the photograph for personal use only. The photograph may not be manipulated in any way and may not otherwise be reproduced, disseminated or broadcast, without the written permission of the White House Photo Office. This photograph may not be used in any commercial or political materials, advertisements, emails, products, promotions that in any way suggests approval or endorsement of the President, the First Family, or the White House.