In 1942 America, the war effort was in full swing; individuals and organizations were coalescing around the troops, and one unique organization was being formed by a favorite American sport:  Bowling.

Seventy-five years ago, officials representing every facet of the sport of bowling met to coordinate efforts to support the troops — bringing together all the sport’s integers to provide the most complete approach to the campaign. Thus, BVL, then known as “The Bowlers Victory Legion” was born.

BVL’s first Administrator, A. L. “Ebby” Ebersole noted in the minutes of that meeting:

“The Bowlers Victory Legion was organized on September 26, 1942 at the American Bowling Congress (ABC) office in Milwaukee when all segments of the bowling family met to unify their support of the war bond sales and other service-oriented endeavors such as the Red Cross and the USO.  Besides ABC, the gathering included representatives of the Women’s International Bowling Congress, the High School Bowling Congress, the National Duckpin Bowling Congress, the Bowling Proprietors’ Association of America, the Billiard and Bowling Institute of America and the Candlepin and Rubberband Duckpin Groups and manufacturers.

E. H. Baumgarten of ABC was elected chairman and A. L. Ebersole of the Duckpin Bowling Congress the vice chairman.”

Subsequently, Ebersole was appointed as BVL’s first Administrative Officer and oversaw BVL’s beginnings:  The first projects focused on improving morale for troops overseas and insuring that wounded service men receive appropriate and timely healthcare.  To support morale, BVL directed the delivery of 400,000 decks of playing cards, 325,000 sports guides, almost 100,000 fishing kits and a variety of sports equipment.  Additionally, three medical evacuation planes were purchased to ferry the wounded home from the battlefields of Europe — known as the “Wings of Mercy” project. 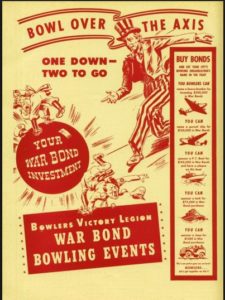 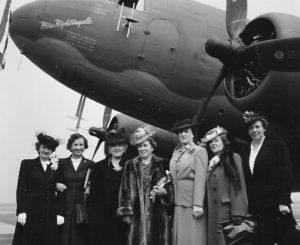 When the war ended, BVL leadership recognized that the need to support those who have served our country was more important than ever and thus renewed their mission of recreation and health care for hospitalized veterans.

BVL then began working alongside the forefathers of today’s recreation specialists.  In an interview with an acknowledged pioneer in the field for the Department of Veterans Affairs Dr. Bernath Eugene Phillips, writer Jeff Mansfield quoted Phillips recalling work for the VA in 1945, “The BVL was one of the first (organizations) that I got associated with when I went to Washington…we used the BVL and started a bowling tournament among all VA hospitals.

The first BVL tournament was held in 1947 and seven of the 31 VA hospitals were entered. (Former BVL Executive Director) A. L. Ebersole deserves the credit (for bringing this recreation therapy to the veterans).” 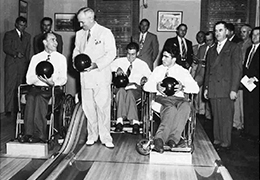 James E. Pixlee, the Director of Athletic Service of the Veterans Administration in 1947 wrote this about BVL, “It is impossible to overstate the value of the aid afforded by the BVL.” 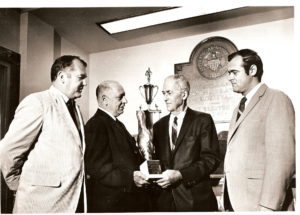 When Ebersole retired in 1974, BVL had earned recognition as a leader in recreation therapy for veterans. That distinction was only furthered under the guidance of the National Bowling Council in the ensuing years, which assumed the task as administrator of the sport’s charity, with the following acting as Chairs of the BVL Committee:

In 1996, when the National Bowling Council folded, the BVL Committee voted to move out into its own entity, with Elaine Hagin at the helm.

“BVL has evolved in its structure over the years, to keep pace with the changing nature of veterans’ healthcare and recreation therapy techniques, as well as changes within our sport,” explains current BVL Board of Directors Chairman John LaSpina.

“BVL was created through the unity of all members of the sport of bowling,” continues LaSpina. “That was the reason for our success. We want and need to get back to our roots. Thanks to our new campaign to encourage bowling center operators to participate in the BVL effort through ‘Care.Commit.Contribute.’ and to our innovative partnerships with industry corporate members, we’re headed in the right direction. But there’s much more work to be done.”

VA Secretary McDonald addressed the industry at Bowl Expo last June, attending the convention to personally thank the sport for its commitment to America’s veterans noting, “Among our many partners, the Bowlers to Veterans Link stands out as a true pioneer. Years before Omar Bradley reached out to Americans to enlist their help in caring for Veterans, the bowlers of America reached out with a helping hand to America’s Veterans and service members. There are a few Veterans organizations that have been helping Veterans longer than BVL, but I’d be hard pressed to name any other organization that has.”

LaSpina concludes, “We know we are doing great things for America’s veterans — our services are truly valued by our partners at the Department of Veterans Affairs. However, in order to keep up with the tremendous need for recreational and therapeutic programs and services we have to step up our game; and we’re working hard to do just that.”

BVL Through the Years: